skip to main | skip to sidebar

The Absurdity of Twain Fever

Mark Twain is the hottest author in America right now. The Boulder Book Store along with just about every other bookseller in America can barely keep ahead of the demand for the recently released 738- 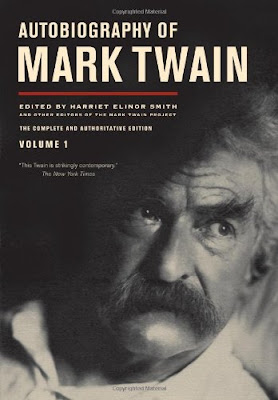 page Autobiography of Mark Twain. The reason the book is in short supply is that no one in their right mind saw this book taking off like it has. The University of California Press, which published a well-researched, finely edited, fairly academic book is simply not equipped to deal with a bestseller of this magnitude.

They shouldn't have to worry about this problem; although I'm sure they are happy to have such a profitable concern. Observing the demand for this book, it seems to be sheer madness and a herd mentality that is driving the Mark Twain frenzy. People are buying this book who haven't glanced at Twain since they were forced to read him in high school or college. My guess is that many copies of the Autobiography now in the hands of gleeful customers will end up, after great disappointment, flooding back into the bookstore in 2011 as forgotten used tomes.

I love Mark Twain's The Adventures of Huckleberry Finn. It's a book that I read in high school and college and returned to for a third time about a decade ago. I've never been disappointed with Huck, and each reading has yielded more rewards and a greater admiration for Twain. My 12th grade English teacher introduced the book as the greatest novel in American history. To this day, I wouldn't quibble with that. (By the way, she considered William Faulkner the greatest American fiction writer and James Joyce the greatest writer of fiction in English. I'm not sure I consider Finnegan's Wake English, but that's besides the point.) 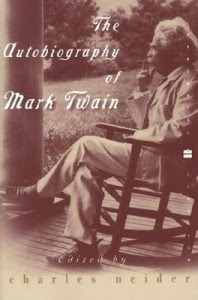 The Autobiography of Mark Twain is no Huck Finn. Not by a long shot. Nearly 500 pages of the 4-pound book is either unreadable doggerel composed of false starts and academic self-aggrandizement or notes and appendices that only a grad student would ever need to dive into.

Esquire did a great break down on how to read the book in one day that serves to highlight the book's shortcomings more than anything else.

In Adam Gopnik's insightful piece in The New Yorker's November 29th edition, he shows how the book's main two selling points aren't really that impressive. The first is that the manuscript was suppressed for 100 years on Twain's wishes. Twain wanted to make sure that everyone he mentioned in the book was dead by the time it was publicly disseminated. The problem with this according to Gopnik is that only 5% of the new volume actually contains unpublished Twain material. His autobiography has been published three previous times, and this one doesn't add that much. The other selling point is that readers are getting a truly authentic view of Twain's life. However, Gopnik notes that Twain gave up on candor early into the writing process. 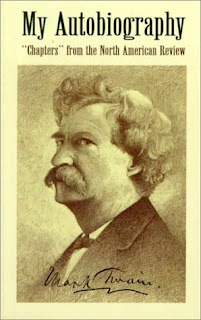 Of course there will be some true Twain devotees that will relish every fresh word and enjoy rereading some of the other material in here. But enough true admirers to push the book to the top spot on all the bestseller lists? No, no, no. Most of those books are going to people who will put the book on their shelf and perhaps read a page or two from it. They'll have just enough to quote at a New Year's Day party if the topic comes up. It will be gathering dust by Martin Luther King Day.

If you want a memoir that will bring a fresh perspective from an entertaining raconteur, I'd humbly suggest a copy of Life by Keith Richards. Oh yeah, there is no problem getting copies of it. Hachette rightfully expected that the Rolling Stone who remembers it all would produce a bestseller that no one would consider a bore.
Posted by Arsen Kashkashian at 4:17 PM

My Abandonment by Peter Rock. A girl and her father live off the land in Portland's Forest Park in this novel that is based on a true story. Told through the eyes of the young girl, it's a poetic work revealing our connection to the natural world.

True Confections by Katharine Weber. Zip's Candy is the setting for this outstanding satire. Alice, who turns out to be an unreliable narrator, details the company's history and her own place in its scandalous past.

New World Monkeys by Nancy Mauro. The death of a boar, a pervert trying to perfect his craft, and the unearthing of the bones of a murder victim are just a few of the plot elements in this comic debut.

Brooklyn by Colm Toibin. Shortly after World War II, a young Irish girl is forced by her family to emigrate to Brooklyn. Cut off from all that she knows she finds love at Dodgers games and Coney Island in this subtle but suspenseful novel.

Let the Great World Spin by Colum McCann. Phillippe Petit's remarkable 1974 tight-rope walk between the World Trade Center towers is the jumping off point (pun intended) of this novel of love, loss and beautiful convergences in a gritty New York City.

Chronic City by Jonathan Lethem. Nothing is as it seems in this brilliant bizarre novel set in an almost recognizable New York City. The revelations at the end left me reeling although I knew that surprises were lurking. Another novel with shades of Saul Bellow.

Border Songs by Jim Lynch. Hilarious novel about a strange border agent on the Canadian border. Lynch effortlessly tells the story from several points of view including the criminal, the cops and everyone in between.

The Signal by Ron Carlson. An adventure and a love story set in the pristine mountains of Wyoming. A sense of both hope and foreboding hangs over the sparse narrative.

Wanting by Richard Flanagan. This historical novel featuring both Charles Dickens and the explorer John Franklin is really a meditation on desire and what was thought to separate the civilized from the barbarians.

Chicago by Alaa Al Aswany. Egyptian students and their professors try to navigate America in this magnificent novel set in the heart of contemporary Chicago.

Gossip of the Starlings by Nina de Gramont. A haunting novel about the seductive power of friendship.

Arsen Kashkashian
I've been reading fiction my whole life. The joy of discovering a new author or a new book keeps me up at night. Short stories, novels and novellas all make me happy.